When we stand at a cash machine or at the reception desk of the doctors surgery, we expect people to keep their distance. When we work on our laptops, text our friends or read a book in a public place – we don’t want people to lean over our shoulders. When we sit and talk in a café or on the train, we feel uncomfortable when someone appears to be listening too intently. In the physical world we expect normal, every-day privacy… so why do those same rules not apply on-line?
If you would like to learn how to ensure normal, every-day privacy when using your computer, tablet or mobile phone, then come to CryptoParty-Mcr. You can learn simple and effective ways to encrypt your emails and chat, and how to browse the internet anonymously. By using encyrption, you will protect your privacy, and help to protect the privacy of others, including political and environmental activists from all around the world.
at 03:15

November 18, 2013 in Uncategorized by Anna Morris

They meet in dark rooms with window blinds pulled down, glued to their laptops, people of all ages, experts, laymen. They call it digital self-defense.
Crypto-parties. The idea was hatched by an Australian two years ago, and it metastasized (like wildfire) across the globe. It is finding particular resonance here in Germany, where allegations that the NSA has been spying on millions of Germans, including Chancellor Merkel, have created something of an uproar.
At crypto-parties you learn about add-ons, plug-ins, how to delete your digital footprint and what combination of numbers makes for effective encryption. The none so subtle message is: Governments have failed to protect their citizens from the American surveillance state (or they have colluded with Washington), and now it is time for ordinary people to take charge of their virtual lives.
Germany has a hacking tradition that dates to the 1990s. Then, hackers were a fringe phenomenon. Now they are at the center of the debate. Their political wing — the Pirate Party — controls seats in state legislatures. They have become a trend and an idea, a refutation of the status quo. Their platform appeals to those who know very little about computers and are afraid that their personal data — their identities, their beings — are being subsumed by intelligence agencies and government-affiliated corporations. The hacker qua civil-rights activist.
In the Zehlendorf neighborhood in the south of Berlin — comfortable, conservative — the Christian Democrats, Merkel’s party, are hosting crypto-parties. They don’t call them that, but that’s what they are. Here, they are less clandestine. They meet in the mornings, not late at night, and with the blinds open. The pensioners bring coffee and cake, and the hackers bring their computer skills, of which there are many. They hunker down and try to make themselves invisible. One hopes they will succeed but somehow doubts it.
by Jacob Krumrey; Berlin on November 15, 2013 from http://www.statelessmedia.com
at 02:52

Did you get a new computer this xmas?

It's a good idea to keep old computers (which are not used any more or that may be thrown away soon), install Linux on them and use them for few tasks which both need be done in a secure environment like OpenPGP email, OTR chat and browsing the web using Tor Project

This is very simple, everybody can do that. It does not really cost anything (just one empty CD/DVD on which you burn, say, Debian 7... which is free to download).

In this way Windows and Mac users get used to using Linux without the shock of their whole system changing. No technical preparation is necessary, just the idea needs to be spread.

So help us spread it!

Privacy is necessary for an open society in the electronic age. Privacy is not secrecy. A private matter is something one doesn't want the whole world to know, but a secret matter is something one doesn't want anybody to know. Privacy is the power to selectively reveal oneself to the world. ~A Cypherpunk's Manifesto by Eric Hughes, 1993
Welcome cypherpunk! Whether you are an operating leviathan of cryptoanarchism or an interested newbie: 30C3 is the perfect place for enhancing your cryptoskills and sharing your knowledge with others. Beginners welcome!
The Cryptoparty assembly will basically focus on two aspects:

Please join our irc at #cryptoparty on irc.oftc.net (Tor friendly!) and follow us on Twitter. There is also a jabber group chat at cryptoparty@conference.jabber.cryptoparty.is.

For joint planning of Cryptoparty assembly we have set up a PAD. Please feel free to contribute!
at 02:55

We are so thrilled to announce that there will be several members of Cryptoparty descending on Ohm 2013 this year and we have formed our very own own village!!! 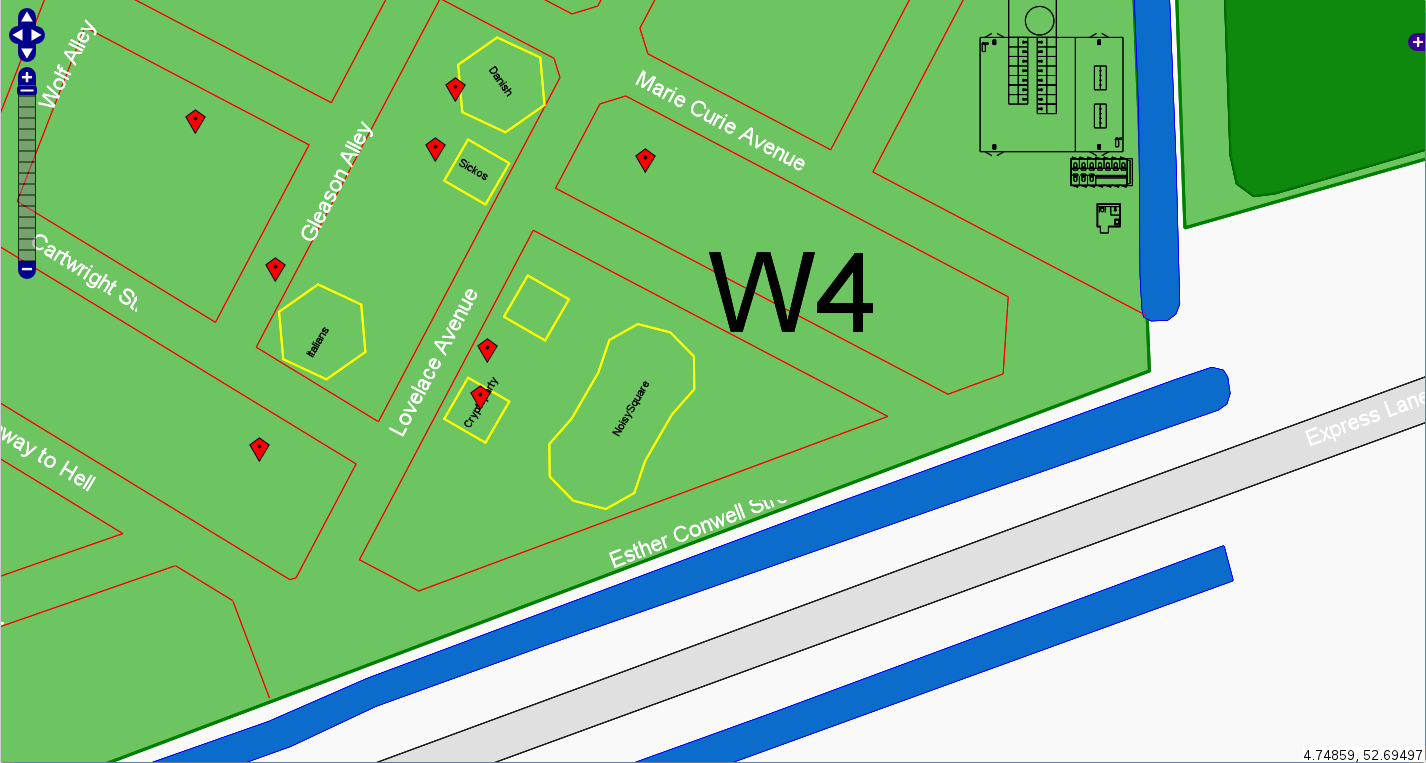 Please have a look and contribute to the wiki: https://ohm2013.org/wiki/Village:Cryptoparty... and remember, 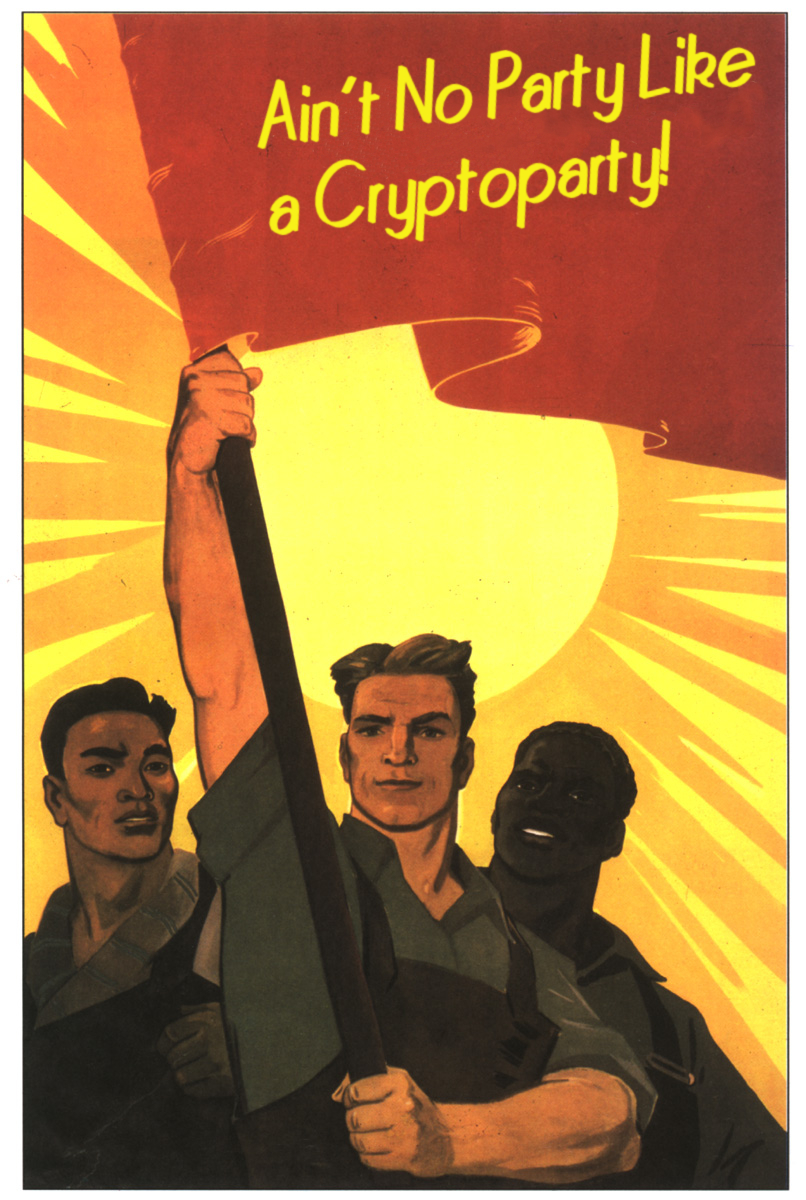 The CryptoParty Handbook tries to provide a comprehensive guide to the various topics that might come up while investigating the realms of computer and internet security and is designed to be a practical guide during Cryptoparties.

The book is written in markdown and then compiled into various formats. Download it as .pdf .mobi .epub or .md

You should always check the fingerprint of downloaded files using commands like sha256sum and compare the resulting hashes against hashes provided by other sources. So if you spread the news about the book, please spread the hashes as well!
The following handbook files have been hashed using sha256sum as a post build step after make install is run on the handbook source code, the results are:
(download)

Writing the handbook is a group effort. For collaboration github is used. Although primarily used by programmers, github provides a very comfortable editor for markdown. Just register, clone the handbook repository, edit it and file a pull request (it is really not hard, just try it out).

Tell us what you think

We are thrilled to announce that the Cryptoparty Handbook is now Kindle-friendly. Please download .mobi .cover.jpg and metadata.opf and place all three files into your Calibre Library.
at 01:08